Adapt the following church skits to fit your particular setting.

This pastor appreciation skit will probably work best with young children. You can do the skit with or without props. It is described below with props.

Put the children in a row along the front of the auditorium. Have six kids hold large cards with the letters, P-A-S-T-O-R, on them - one letter per card.

Have each child with a card step to a microphone or say from his/her spot the following in order.

Then have all the children say in unison, Thank you for being our Pastor!

This pastor appreciation skit trys to say, "Thank you" without using words.

Someone dressed as a pastor.

A woman to play the man's wife in two scenes.

The pastor character will need a bible.

A heavy burden...like a full backpack.

The woman should wear a dress that could be both a wedding dress and a dress for a baby dedication.

A doll wrapped in a blanket...or if you're brave, a real baby for a scene depicting a baby dedication/baptism.

A desk and other items to create the look and feel of a pastor's office.

A graduation cap and gown.

A casket or something that looks like an open casket.

A recording of Ray Boltz's song, "Thank You For Giving to the Lord."

A PowerPoint slide that reads, "Pastor, for all you do in every season of our lives...Thank You."

Darken the entire auditorium and use spotlights, if you can, to illuminate each scene.

A "pastor" walks along with a man through various scenes of Layman Larry's life. Isolate each scene in areas at the front of the auditorium beginning from the far left and progressing across the front of the auditorium to the far right. Begin with the room completely dark so the characters can get in place. Start the song, "Thank You," by Ray Boltz (could either be a CD or a live performance).

As the music begins, use a spotlight to illuminate the first scene. Fade spotlights out and on as each scene progresses.

Scene One
Layman Larry is hunched over with a heavy burden on his back. He struggles to walk. Pastor approaches with his open bible. He stands next to Larry pointing compassionately at the Bible and explaining (without words) the gospel.

At first disinterested, Larry begins to soften and listen. Then, overwhelmed with emotion, Larry looks up at the pastor and nods in agreement.

The two bow in prayer. Then the pastor helps remove the burden from Larry's back.

Fade to black. Larry and pastor move to next scene.

Scene Two
They are at Larry's wedding. Larry and his bride are arm in arm listening to the pastor during their wedding ceremony. The pastor is speaking with open bible. Then the pastor mouths the words, "You may kiss your bride." The couple smiles and kisses.

Fade to black. All three characters move to scene three of the pastor appreciation skit.

Scene Three
In this scene the couple is having their newborn baby dedicated/baptized by the pastor. They are all smiles and laugh as the baby does something cute. The pastor takes the baby from the couple and dedicates/baptizes her/him. He returns the baby to the couple and hands them a long stem rose.

Fade to black. Pastor and Larry move to the next scene.

Scene Four
Larry enters the pastor's "office" upset. Pastor gets up from his desk and listens compassionately to Larry. Larry talks then breaks into tears.

Fade to black. Pastor and Larry move to scene five of the pastor appreciation skit.

Scene Five
Larry stands proudly with his now-grown child. The son or daughter is wearing a graduation cap and gown. The pastor is with them. The three talk excitedly. The scene closes with pastor warmly congratulating both father and child.

Fade to black. Pastor and Larry move to scene six.

Scene Six
Pastor stands with Larry at an open casket. He has his bible open again while talking to Larry. Larry is obviously sad, even struggling to hold back tears.

Scene Seven
A PowerPoint slide appears reading, "Pastor, for all you do in every season of our lives...Thank You."

Allow the song to finish. Then fade to black.

This pastor appreciation skit is a parody of the "Top 10 List" from The Late Show with David Letterman. Each weeknight Letterman gives his top 10 list between 11:55 p.m. and 12:05 a.m. (Eastern) on CBS. So if you're not a night owl, you might want to record a show or two to give you an idea of what this would look like.

You could just have someone read the top 10 list without any extra props. Or you could do the whole thing.

If you go the elaborate route with this pastor appreciation skit, have your worship band or pianist play some introduction music. Your church PowerPoint people could design a presentation similar to the one used on the show. And you could have a host dressed in a dark suit sitting behind a desk holding a blue card.

He would say, "I have here this morning's Top 10 List.

The category for today's Top 10 list is, 'Signs your pastor didn't have time to study this week."

Here we go with the top ten signs your pastor didn't have time to study this week.

Number 10: He tells the ushers to take the offering twice.

Number 9: During the children's sermon he serves cake and ice cream.

Number 8: He asks you to give a 20 minute testimony.

Number 7: During his pastoral prayer he prays for your government officials...listing every member of congress/parliament by name.

Number 6: He wears his reading glasses for the entire sermon.

Number 5: The sermon sounds eerily similar to one you heard Chuck Swindoll preach on the radio last Thursday.

Number 4: Instead of preaching he decides to show slides from his last vacation.

And the number one sign your pastor didn't have time to study last week is:

If you didn't know better you'd swear he was lip synching to Charles Stanley."

Have the musicians repeat the introduction music to end the pastor appreciation skit.

Add a sermon to your pastor appreciation skit.

What do you think? Have something to add? 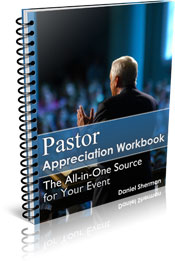 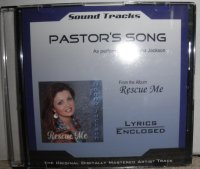